Cinematic Synth based on Smooth Synth Strings and Choirs

Bring new lush atmospheric dimensions to your productions with Phoenix, an instrument based on a set of smooth synthetic strings and choir samples. It’s perfect for creating wide strings backdrops and ethereal choirs instantly. Phoenix is powered by our sample-based-synthesis engine VST/AU, Mirage (included free). This flexible engine allows you to process the ‘oscillators’ in three separate audio layers, with envelopes, LFOs, filters, and a whole rack of effects.

The result is a sound design tool perfect for creating cinematic pads, keys and basses, and for easy underscoring. Examples of such sounds are included in the 80 production-ready presets that come with the product. These are organised into five categories: basses, keys, leads, pads and sound effects.

The core sounds of this library are six synthetic strings and choirs instruments. These sounds are useful even before processing. Ethereal choirs and lush string pads can be made instantly. However, the three-layer structure of Mirage allows you to take these sounds even further. Complimentary sounds can be layered together and modulated with LFOs and filters, and reverbs can be applied. Using these features, it is easy to create rich textures and soundscapes with movement. But this is by no means the extent of Phoenix’s capabilities.

Keys and bass sounds can also be produced. In the included presets you will find many examples of these types of sounds such as low rumbles, plucky staccatos and clean subs. Phoenix also works excellently when layered with real instruments. The smoothness of the sounds of this product gell superbly with them, enhancing their richness and width.

Mirage is a sample-based-synthesis VST/AU plugin for Windows and Mac that comes free with any powered-by-Mirage product. It’s the control hub for FrozenPlain’s new sounds, offering a powerful set of parameters and effects for rapid, flexible sound design, no matter what the sound source is.

Once it’s opened up in your DAW, you’ll see all of your powered-by-Mirage products ready to click on and use instantly. There’s no subscription or log-in procedure, just instant access to the sounds and presets. 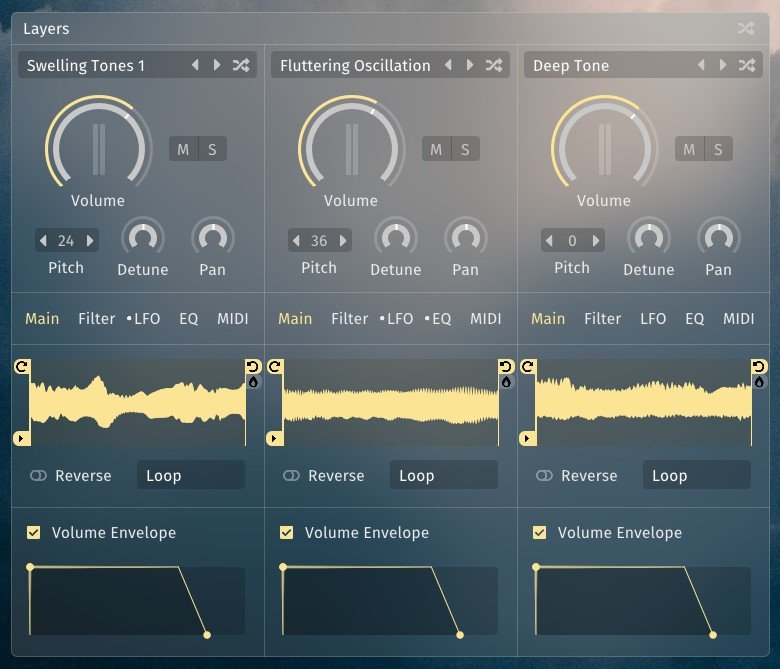 Three independent sound layers can be layered together 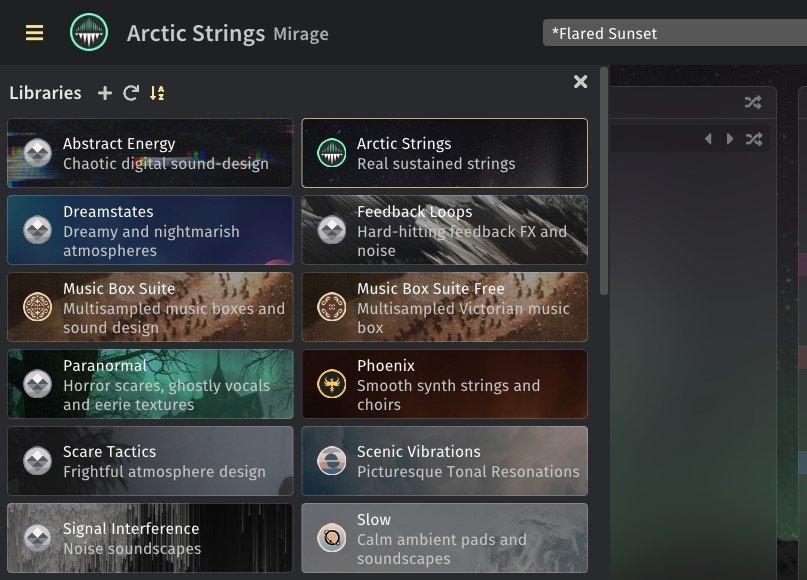 Mirage libraries are loaded from a side panel 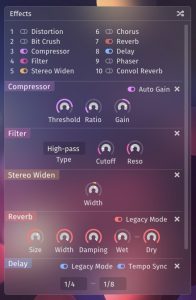 9 effects can be used to shape the sound 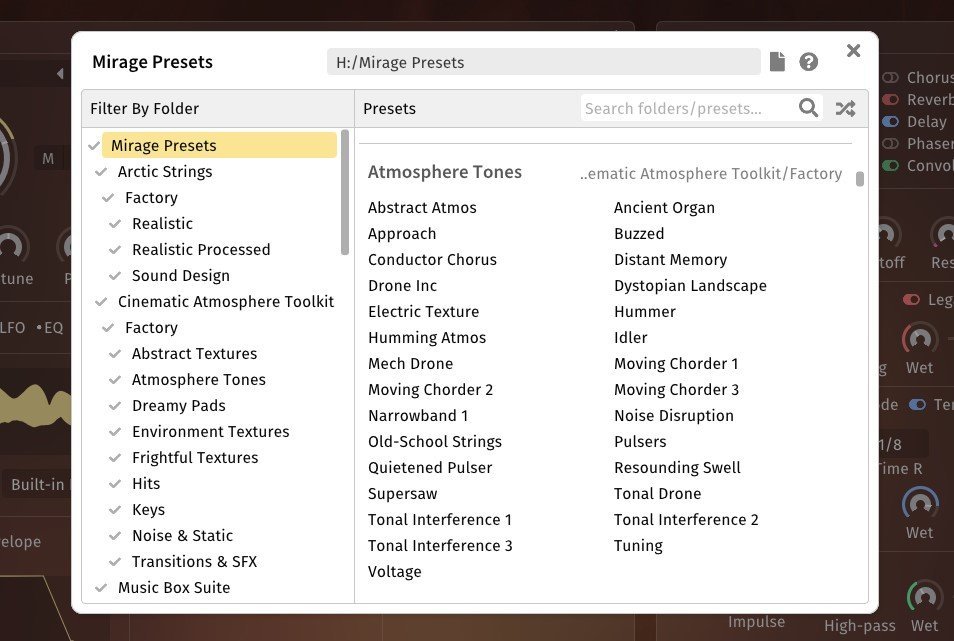 Presets can be quickly loaded and saved

Mirage allows for up to three different sounds to be controlled separately and layered together. The layers in Mirage have the following controls unique to them: pitch, volume and pan, filter, volume envelope, LFO, EQ, sample loop settings and MIDI settings. These controls facilitate an incredible amount of manipulation over the original sound source.

Designed to be played

Mirage is set up to make fully playable patches. Sounds will respond to both MIDI velocity and the sustain pedal (MIDI CC 64). On top of that, any parameter in Mirage can be controlled by knobs or sliders on your physical MIDI controller. This is done by simply right-clicking the parameter, selecting ‘MIDI learn’ and then moving your controller. And of course, Mirage can be automated with your DAW.

Minimum friction from your mind to your DAW

Mirage is designed to not get in your way. It is fast to load up and is efficient with CPU usage. It has a vector-based GUI that can be resized so that it will work on any size screen. The controls are laid out intuitively, and a full description each control can be viewed by hovering the mouse over it. In the rare case when you need some deeper info, a PDF manual with all of the nitty-gritty details covered is included.

For spontaneous inspiration, Mirage features controls for randomly loading presets and changing parameters. The random preset button has 4 modes for scoping the randomisation to your preferred level, whether that be a folder, a library or the given search text. Parameters can be randomised at various levels too: complete randomisation, just instruments or just the effects rack.

Mirage is simple on the surface, but has depth for complex sound design when you need it. Initially you might start with exploring the ready-to-use factory presets using the presets browser. But from there you can further layer, mangle and modulate the sound to be the perfect fit for your track; Mirage is a powerful tool for creating utterly unique organic instruments.

A rack of built-in Effects

Built-in effects such as distortion, bit-crush, chorus and stereo widener can be used to enhance the sound with extra harmonics or extra simulated width. The compressor can be used to control dynamics or add punch, and the filter can be used to isolate just the frequencies you need.

Mirage also has reverb and delay effects for real space simulation. These are great for sound design too. One of the reverb effects is a convolution reverb; this is typically used to add a real-sounding reverberation to the signal by using a sample of a real space (AKA an impulse response). Mirage features both realistic impulse responses and abstract ones for creative sound design.

By purchasing this product, or any powered-by-Mirage product, you gain access to updates with new features and improvements. These will almost always be completely free. We will ensure these updates never break backwards compatibility. This means as the capability of Mirage expands, your old DAW projects or presets will still work just like they used to.

If you already have Mirage, you can visit this page to download the latest version. It’s worth noting that Mirage has no use unless you have a Mirage library; in the current version, these can only be made with our internal tools.

You might make use of Phoenix in a film/TV/video game score. A preset such as Shimmering Cavern could be used to create a sense of wonder and beauty. This preset uses three sound layers spread across three octaves. LFOs subtly modulate the volumes of these layers, and a touch of bit-crush distortion is used, resulting in a sound that shimmers in the high frequencies. Similarly to this, there are many other presets included in this product that have an emotional character. This track could be added to by using the Bass Pluck preset with a low pass filter applied to it. This would work excellently as a driving ‘underscore’ element.

Another possible use for Phoenix might be in an ambient track. A preset like Smoothest Pad might be used to play wide-spanning chords, gently transitioning into each other in the background. A Keys preset like Melody Drops could be used on top of this for a distant emotive sounding melody. A Bass preset such as Sub Bass Repeater could be used to fill out the low end, and give drive to the track with its pulsing pattern.

Add warmth to any genre

A third possibility might be in a track outside of the ambient or cinematic genres. Phoenix can be used to add character to your electronic/rock/hip hop track. It can be used as something to bring depth to the background or to layer up with your real performances. The various strings presets of Phoenix, in particular, might be useful in these situations. These synthetic strings have a smooth organic sound to them, similar to their real counterparts, but with a softer character. Phoenix might also be useful in writing a breakdown in a track – add atmosphere and a sense of open space – before bringing back the drive of your track

Already own Phoenix as a Kontakt library?

This product was initially created for Kontakt and has now been moved to Mirage. This new version of Phoenix is a reinterpretation of the old samples. We believe this new version is slightly better for rapid sound design and for ease-of-use.

What is different about the Mirage version?

The core sound is essentially the same except for the following two changes: the tuning of one of the instruments has been improved, and all samples have been trimmed of unnecessary length. The Kontakt version and the Mirage version are powered by different engines with different architectures; however, the features of each are roughly comparable.

Why might you want to purchase the new version?

If you own the Kontakt version, you might consider purchasing this new version if you would like to access the Phoenix sounds in Mirage, a new engine that will continue to grow and improve. Mirage is excellent for rapid sound design and ease-of-use. It is also a consistent interface that is used by other FrozenPlain products.

You might also consider the new version if you would like access to the 80 brand new presets. These presets are production-ready. They demonstrate the capabilities of Phoenix are an accessible gateway to mastering your own sound design using this tool.

Phoenix is distributed as a digital download only. It should only take a matter of minutes before you can start using it in your production. FrozenPlain has a streamlined checkout system, you only need to put in essential information. For the first product you buy here, you will be prompted to set a password in order to create an account. All products you buy on this site are added to your account and the latest versions can be re-downloaded at any time.

You can pay for Phoenix with a credit card, debit card, PayPal, or Apple Pay. The payment process is handled by our online reseller Paddle.com. Once payment has been completed successfully you will be able to download Phoenix instantly.

Phoenix is designed to be as accessible as possible to producers, composers, musicians, and sound designers. You probably already have what you need if you are producing audio on a reasonably modern computer. There is one exception – Phoenix is not available in the AAX plugin format yet, and so will not run in Pro Tools. Here are the specific requirements:

Phoenix was previously released as a Kontakt library. This updated version makes use of the same samples in a new engine that is comparable to the Kontakt version. Here’s what people had to say about Phoenix-for-Kontakt on KontaktHub.

I am a big fan of Frozen Plain. This instrument is one of my favourites. It gives you ethereal choirs, pads and sounds, that induce a solemn atmosphere in a minute. If you love such stuff, just buy it! – Martin Juenke

Perfect ambient/underscore/cinematic instrument to lay a wide, atmospheric basis to your track. The impulse responses and additional FX are top notch as are the instrument sounds! There’s just 6 instrument sounds and it’s basically all choir or orchestral strings, but they’re surprisingly versatile. I’d be completely satisfied if there’d be a brass sound, too. – Marius Schlossbauer 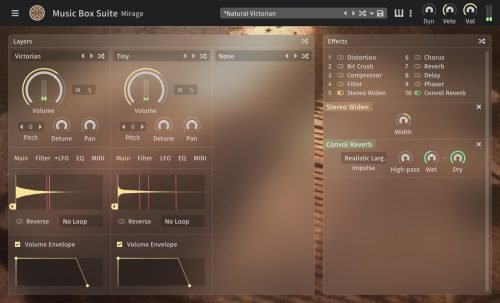 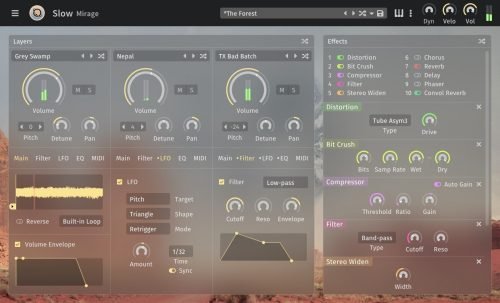 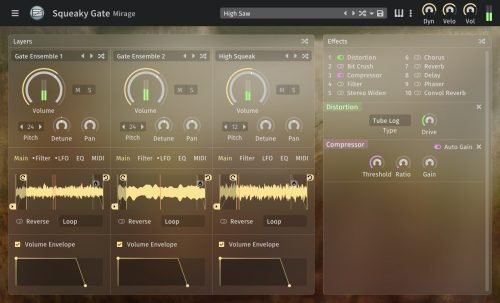 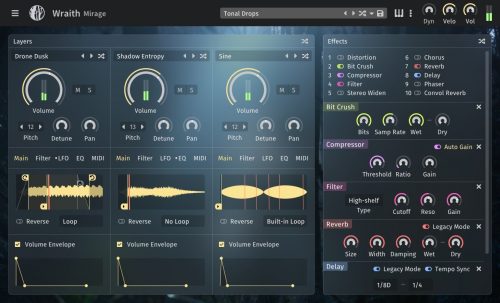 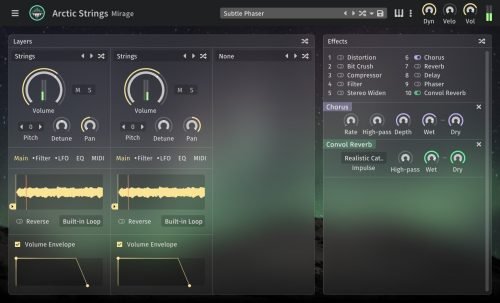 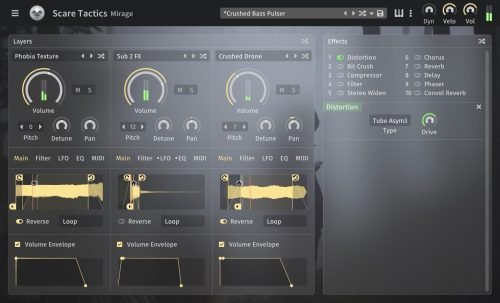 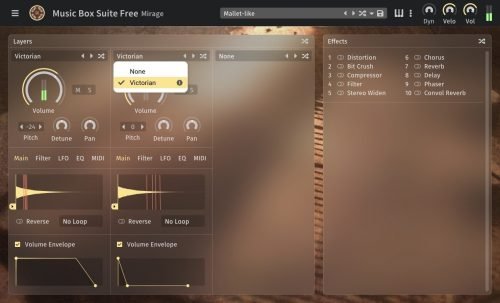 Learn about our new products by joining our newsletter using this one-click form. 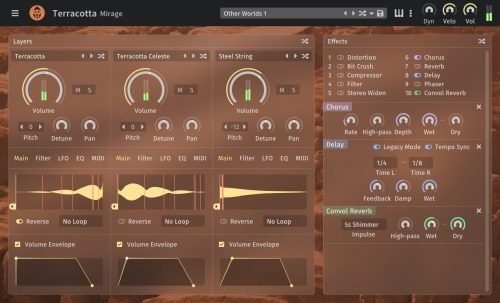 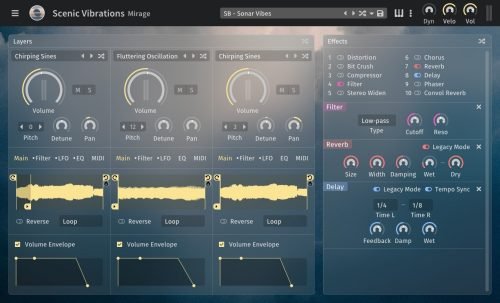