Obelisk makes it effortless to write chord progressions and explore new harmonies for your melodic lines. This VST/AU plugin transforms each MIDI note that you play into a harmony that (optionally) matches the key and scale of your track.

Music theory knowledge is not required. The structure of the harmony is created by selecting intervals on the right of the GUI, or by loading up one of the many chord presets. By pressing a few notes on your keyboard, you can create the harmonic basis of your new track.

Obelisk works with any of your synths or samplers. Just set up your DAW to send MIDI from Obelisk into your synth. Please see the requirements to see if your DAW is compatible (most are!). 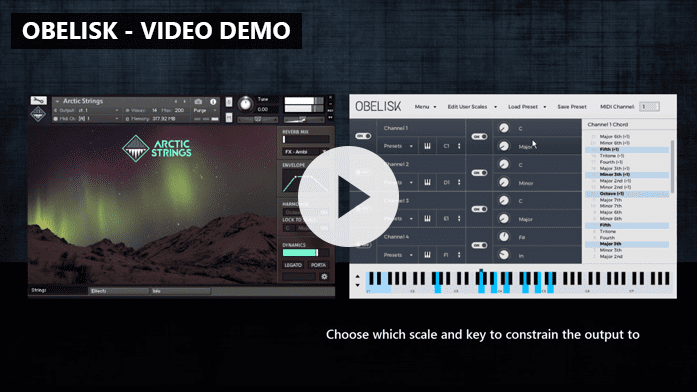 Get started quickly with presets

For convenience and for getting started, Obelisk comes with lots of presets for both chords and scales. Selecting chord presets is a fast way to try different harmonies, and let your ear decide what works.

Obelisk can be set to constrain notes to a given key and scale. When this is enabled, you have many options for what scale to use – well beyond just major and minor. For example, scales such as Blues, Arabic or variations of the Pentatonic scale can be selected. Exploring unusual scales can take your music to uncharted places. 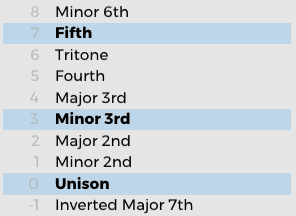 Each MIDI note that you play into Obelisk triggers the construction of a chord based on that note. The structure of this chord is determined by the Chord Picker, which is found on the right side of the GUI. This chord picker represents harmonies relative to any input note. For example, with just the “0: Unison” option selected, any note played will pass through unchanged. If however you also select the ‘7: Perfect 5th” option, Obelisk will add a note seven semitones above any input note. Now if you add a major 3rd, Obelisk will create a Major triad chord based on any note you play.

Constrain the chords to a scale and key

Using only one type of triad for your chords doesn’t sound very good. It is more useful to use both major and minor triads that fit the scale that you are using. For this reason, Obelisk has a constraining algorithm that intelligently shifts notes to fit into a given scale and key. This constraining happens after the chord has been generated – as in the process described in the previous paragraph. The resulting MIDI is then sent to a synth of your choosing. Visit this page for instructions on how to set up your DAW to send MIDI from Obelisk to your synth.

A permanent part of your track

Obelisk is designed to be a permanent fixture in your track. It converts notes into chords in real-time. This has the benefit that it allows for you to change chord types without having to edit the MIDI data of your track. Obelisk does not have a way of saving chords or writing MIDI files. However, a handful of DAWs feature the ability to capture Obelisk’s MIDI output and write it to another track.

Create better harmonies in any genre

Obelisk is an excellent tool for any musician or producer working with MIDI. Anything from techno to orchestral, Obelisk can make things easier for you. For example, if you only need the basics, Obelisk has you covered with the constraining algorithm, and the chord and scale presets. Conversely, if you want to get experimental with harmonies, Obelisk has advanced features such as the ability to create custom scales and to use key-switches to change settings across the duration of a performance.

Obelisk features an algorithm that identifies the name of the chords that it creates. The chord name is shown at the top of the GUI. This feature is great for two reasons. Firstly it makes it easier to harmonise other parts of your track. You can easily see what chord is being produced and therefore make better judgments in other parts.

And secondly, it turns out to be a great way of learning chords and scales. Just by using Obelisk day to day, familiarity with some basic music theory rubs off; this is useful in lots of aspects of music creation. Moreover, you can even play chords into Obelisk for the sole reason of identifying them. You can turn off the constrainer, and set the chord picker to be just “0 Unison”. This means notes go through Obelisk untouched, and you will see the chord name.

As well as this, Obelisk highlights the notes of the selected constrained scale on the GUI keyboard. At a glance, you can see what notes are in a particular key and scale. Again this is useful for music theory knowledge, and easier harmonisation of other parts.

Obelisk is a useful tool regardless of whether you have music theory knowledge or not. Primarily, Obelisk makes it easy to experiment with how different harmonies will sound in real-time, which is helpful to all music creators.

By selecting some intervals on the Chord Picker and keeping the constrainer on, you can play different notes on your keyboard and instantly hear what works for your track.

Obelisk is a handy tool even if you know exactly what harmony you want. For example, you might want to harmonise the main melody line of your piece with a voice playing a 3rd above it. This can be done by selecting one of the 3rd intervals on the Chord Picker and setting Obelisk’s constrainer to the key and scale of your piece. You now have the melodic line perfectly harmonised to the appropriate major or minor 3rds. And if you ever wanted to change the harmony, all you need do is select a different interval on the Chord Picker.

Obelisk is excellent for strengthening a melodic part too. Playing an instrument or synth with multiple octaves can beef up the sound. This works particularly well for basslines and for leading lines. Obelisk makes this very easy to do, and very easy to change.

It is possible to use a single instance of Obelisk to perform for the duration of your whole track without needing automation. You can use different chord types for the chorus, verse and outro, for example. As well as chords, you can also change scales and keys on-the-fly.

These setting changes is acheived by using Obelisk’s key-switches. A key-switch is a specially assigned MIDI note that when pressed triggers a change. Key-switches are usually assigned to very low pitch notes – ones that you won’t accidentally hit.

The key-switches in Obelisk are linked to its ‘channels’. Obelisk has 4 of these identical ‘channels’. They can be seen in the main section of the GUI. Each channel stores its own instance of the Chord Picker, and it’s own instance of other settings too. Only one channel is active at a time – as shown with the on/off buttons down the left side. Each channel has the option to enable a key-switch.

When the assigned key-switch is pressed, the channel is activated. This means you can set up each channel to hold a different chord – and then at the right moment of the track, you can press the key-switch and therefore change the chords produced by Obelisk from then onwards.

Obelisk is a modern tool for a modern producer. It features a resizable GUI and has options for changing the colour theme. Obelisk also has the option to display tooltips for all of the controls; hovering over a control will trigger a small text description to pop up.

Controls that appear as knobs on the GUI can be automated with your DAW. Sometimes these knobs have many different options. In these cases, finding the right option is made more accessible by right-clicking on the knob and selecting from the drop-down menu.

Obelisk is a tiny download at roughly 1.3MB, and the installation process is painless. Just unzip the downloaded file, and run the installer.

Obelisk is distributed as a digital download only. It should only take a matter of minutes before you can start using it in your production. FrozenPlain has a streamlined checkout system, you only need to put in essential information. For the first product you buy here, you will be prompted to set a password in order to create an account. All products you buy on this site are added to your account and the latest versions can be re-downloaded at any time.

You can pay for Obelisk with a credit card, debit card, PayPal, or Apple Pay. The payment process is handled by our online reseller Paddle.com. Once payment has been completed successfully you will be able to download Obelisk instantly.

Obelisk is a VST or AU plugin for both Windows and Mac. Obelisk requires a DAW that can route the MIDI from Obelisk into another synth. Almost all DAWs can do this, but there are a few exceptions; Obelisk will not work in Logic 9 (or lower), Garage Band, Maschine, Reason. These DAWs do not feature the necessary MIDI routing capabilities. Obelisk is also not available in the AAX format and so will not work in Pro Tools. Here are the specific requirements:

How to setup Obelisk in your DAW