Simply run the installer application and follow the instructions. Obelisk is currently available as a VST2 (for Windows and Mac), and Logic X AU plugin (for Mac). If you use Logic X as your DAW then use the AU version, for any other DAW use the VST version. If you would like to learn more about what these different formats are, see https:// frozenplain.com/audio-plugin-formats/.

Extra info: The AU version of Obelisk is designed for Logic X. It will not work with Logic 9 or lower. It also is not guaranteed to work in other DAWs aside from Logic X. For these other DAWs, it is recommended that you use the VST version instead. Obelisk works as a MIDI FX in Logic and is opened in the MIDI FX slot on the mixer tracks.

Connecting Obelisk to a Synth

VST: The way that Obelisk is connected to a synth is different for each DAW. Obelisk needs to receive MIDI input and needs to be routed to output MIDI into something else. There is an instructions page on https://frozenplain.com/products/obelisk showing how to set up Obelisk in some of the popular DAWs.

Logic X: In logic, Obelisk is opened as a MIDI FX plugin in your instrument mixer tracks.

Obelisk consists of 4 identical slots, only 1 channel can be active at a time. Having multiple slots allows you to easily change between chords, keys and scales as you play. The ON switch on the left of each is used to select which slot is currently active. This can also be done with keyswitches. Just right of the PRESETS button is a keyswitch icon, this can be toggled on and off. When on, when the key is pressed (set by the control just right of the button), this slot will become active. The second ON switch will turn on the constraining algorithm. When on all output from this slot will be constrained to the key and scale set by the 2 knobs just next to it.

Each slot has its own chord picker, this is shown on the right of the GUI. The chord picker shows the chord for the current active slot. This is the interface that you use to select the intervals that you want to harmonise the input with. This is simply done by clicking on the notes that you want. Active notes are highlighted blue. If you select no notes, there will be no output from Obelisk. 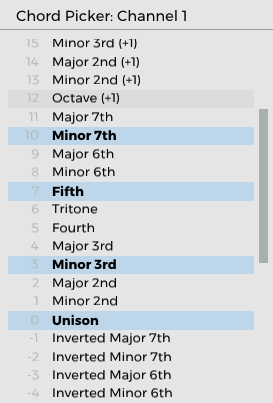 The GUI keyboard shows you lots of information about the MIDI input and output of Obelisk. The range that you want to show can be chosen with the left and right arrows either side. In the picture below the bottom 3 white notes are highlighted in a dull blue. This is to indicate that they are keyswitches. You will also note that throughout the whole keyboard some notes are slightly coloured. This shows the current key and scale that you have selected. Right above the keyboard is the area where the notes that you play into Obelisk are shown. You can see a small marker above the G4 in this image. The bright blue notes show the output of Obelisk.

Obelisk has the option for you to create custom scales. This is done by just selecting the intervals that you want using the buttons in the menu. These custom scales are available from all of the 4 slots. They can be found as the last 4 options of the scale knob. As well as vertically dragged, the scale sliders can be right clicked which will bring up a menu. 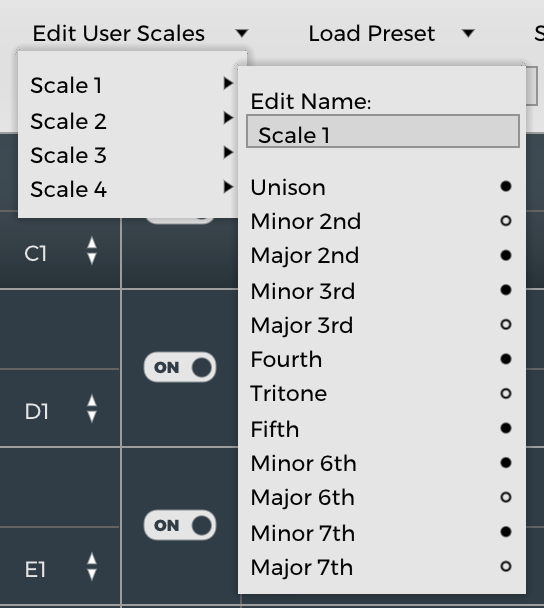 Create an Account
Manage Cookie Consent
To provide the best experiences, we use technologies like cookies to store and/or access device information. Consenting to these technologies will allow us to process data such as browsing behavior or unique IDs on this site. Not consenting or withdrawing consent, may adversely affect certain features and functions.
Manage options Manage services Manage vendors Read more about these purposes
View preferences
{title} {title} {title}