Mirage is built around an architecture of three layers. These are displayed in three columns starting from the left of the main panel. Each layer is identical. Mirage’s layers are the first things in the processing chain; each layer is processed in parallel, and then the three streams of audio are mixed together and fed through the effects rack, from top to bottom.

The topmost control of each layer is perhaps the most important: the instrument picker menu. These are often multi-sampled instruments, but also sometimes just a single sample that is playable across the keyboard. What instruments are available for you to pick is determined by which library is loaded.

Depending on which instrument is loaded, you might notice minor differences in what controls are available; this is normal. 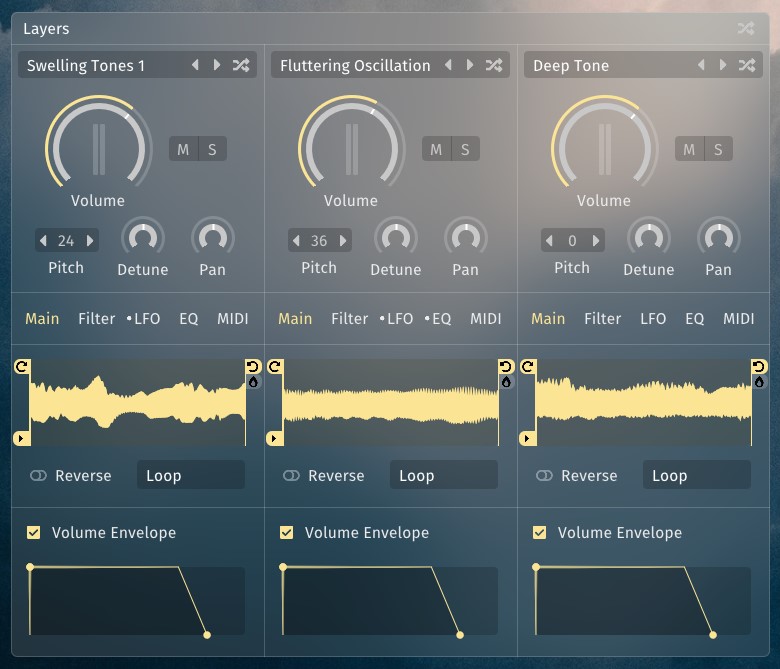 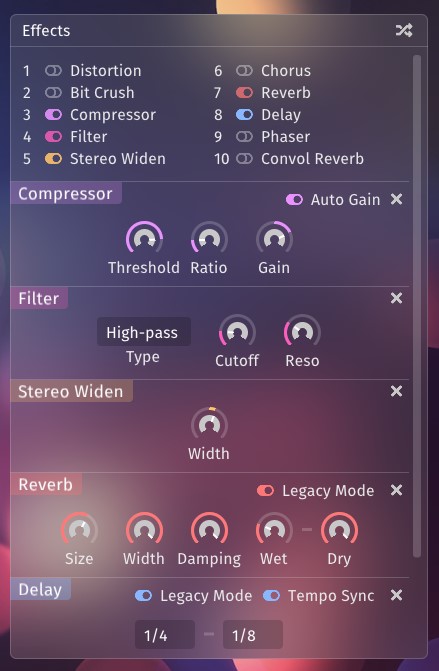 All automatable parameters in Mirage can be easily assigned to a MIDI CC. Perhaps the most common MIDI CC used is the mod-wheel, which is CC number 1.

Always set a MIDI CC to a parameter

Alongside the MIDI learn functionality, you can set up a more permanent relationship between parameters in Mirage and sliders/knobs on your MIDI controller. To do this, MIDI Learn a parameter, as explained above. Once completed, when you right-click the parameter, you will see a new toggleable option for Always set MIDI CC to this. You can toggle this option to set the permanent relationship. If enabled, whenever you load up a new instance of Mirage, the CC number will be bound to the parameter.

By default, MIDI CC1 (AKA the mod-wheel) is set up to control the Dynamics slider in Mirage in this semi-permanent fashion.

It’s worth clarifying that these settings are stored in different places. MIDI CC-to-parameters are stored/loaded when you save/load your DAW project; they are not saved/loaded when saving/loading presets. The option for permanent MIDI CC-to-parameter mapping is neither saved in preset files nor in your DAW project. Instead, it’s saved in a preferences-file on your computer.

Mirage can be controlled with a sustain pedal. A sustain pedal is a special kind of MIDI controller that sends MIDI CC-64 messages. These messages represent an on or off state.

When Mirage receives a sustain pedal on message, all notes that are currently held will sustain until a corresponding sustain pedal off message is received. The notes will persist even if the notes are released from the keyboard. Only releasing the sustain pedal will trigger them to stop. This is a common behaviour for synths and samplers alike. It roughly simulates the behaviour of a real piano sustain pedal.

Each layer in Mirage has a switch that changes the behaviour when pressing the same note multiple times while the sustain pedal is held down. This parameter can be found in the MIDI tab of each layer and is called ‘CC64 Retrig’.

When ‘CC64 Retrig’ is turned off, and you are holding the sustain pedal down, nothing happens if you press the same key multiple times – the new up and down is ignored – the sound continues to sustain just as it did before.

However, when ‘CC64 Retrig’ is on, the note is retriggered (the sound ends and a new one starts); this behaviour tends to be the more intuitive option. Note that this switch is per-layer, not global. This allows for more powerful customisation of a preset.