The Efffects Engine is not a purchasable product, it is a script that is built into selected FrozenPlain Kontakt libraries. Because the Effects Engine is featured in multiple libraries, details concerning the script will be kept on this single page rather than duplicated across many. 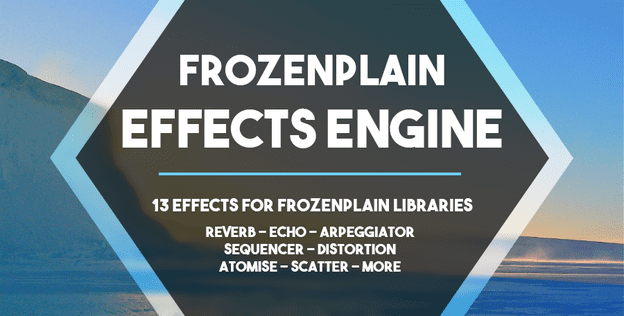 The FrozenPlain Effects Engine is a script that comes built into FrozenPlain Kontakt Libraries. The engine greatly improves the options for sound design and customisation by adding 13 effects.

The effects are turned on using the buttons on the left. The colour matched effect will then appear on the main panel. The effects will always be arranged in the same order as the buttons – from top to bottom. Only 4 effects can be shown on the main panel at once. The up and down buttons will become active when are more than 4. A preset can be selected from menu in the top right of the effect (1 to 5). If you want to reset a knob to its default value, hold CTRL and click.

For more comprehensive information on the effects engine, have a look at the PDF. 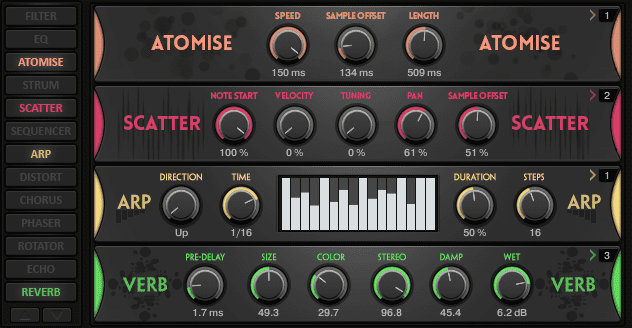 The EQ is a simple 2 band EQ. Each band consists of a frequency control, a bandwidth control and a gain control.

The Atomise effect can be used to repeat held down notes. The speed of the repetition, the starting point within the sample and the length of each note can be chosen using the 3 controls. This effect will allow you to create granular synth-like sounds and create pads out of any sound. To get rid of the ‘machine-gun’ effect you can add the Scatter unit to randomise the start time and sample offset.

The strum effect will turn any notes played simultaneously into a strum. The speed of the strum is chosen with the speed control, a value of 19ms means that there is 19 milliseconds between each note in the sequence. The direction of strum can be chosen and also the sensitivity of the chord detector.

The scatter effect is used to randomise and humanise all notes. This includes notes played with a keyboard and also notes generated by the strum, arp and atomise units. This effect is particularly useful at smoothing out the sound of the atomise effect.

The sequencer works essentially like a LFO. The shape of the LFO can be drawn on the table on the right. It can modulate the volume, pan and cutoff and resonance of both the low pass and high pass filters. The smooth control smooths the jumps between the steps.

The arpeggiator will play an arpeggio of the notes you hold down. The direction of the arpeggio is chosen with the direction control. The table on the left is used to set the velocity of each note of the sequence.

The distortion effect is made from 3 parts. The first is a simple distort effect which is control with the drive and dampcontrols. The second is the saturate control, this is an effect that applies subtle compression/expansion and distortion to saturate the sound. The third part is the lo-fi controls, this is a bit crusher distortion effect consisting of the bits, sample rate and colour controls.

The chorus effect thickens the sound by duplicating the voices.

The phaser uses filters controlled by LFOs to create modulate the sound.

The rotator effect emulates a real rotating speaker cabinet such as the Leslie speaker.

The echo effect is a tempo synced delay. The timing of the echoes can be unsynchronised by pressing the s button.

he reverb effect is an algorithmic plugin that is used to emulate real spaces.